Number of people in Amsterdam

In the first quarter of 2009 the population of Amsterdam increased with 1500 people. In the total of 2008 Amsterdam increased with 9000 people. At the beginning of 2009 the official number of people is 756.237. During a average day a little less then 200.000 people come to Amsterdam to work. On a yearly basis 5 million tourists visit Amsterdam. It is clear that Amsterdam is changing; the example above shows the rise of the amount of people in the city. This change in the people of Amsterdam will have impact on the hospitals in Amsterdam.

People are getting older. The average age of people in Amsterdam is in 2008 37 years. In 2003 this will probably have increased to 40 years.

Amsterdam is getting more and more diverse. The people of Amsterdam currently 51% autochtoon, 35% non Western allocthtoon, and 14% western allochtoon.

The elderly people are not offten subject to traffic accidents (see below) but the impact of the accident is heavier (dead rate is higher).

Public transport is improving. The central station of Amsterdam is being used by 280.000 on a daily basis. Within 5 years this will increase to 350.000. This will make it the busiest station in the Netherlands. The station in Amsterdam Zuid will increase, as the ‘zuid-as’ is, and therefore will increase within 15 – 20 years time to the size of Utrecht Central. 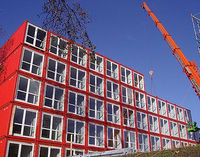 House prices is increasing (slightly) and this will decrease the number of people in Amsterdam. Because of the increasing housing price more people will leave Amsterdam and come back to work in Amsterdam. This will increase the traffic problems. http://en.wikipedia.org/wiki/Traffic_congestion

Office of Research and Statistics (http://www.os.amsterdam.nl/)

The application below shows a good insight in the economics of Amsterdam. http://www.amsterdamconjunctuur.nl/OS.Conjunctuur/Template.aspx?RID=9&Mode=live [edit] Web Resources: http://www.os.amsterdam.nl/