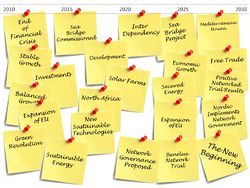 The year is 2030 and the Northern African countries are celebrating the finally concluded agreement creating the Mediterranean Union. This treaty, a French initiative, creates a trade zone like the one implemented by Europe with the EU. Now, countries like Morocco and Algeria will be able to access more easily the EU countries and also take advantage of all trade agreements between these two regions.

This agreement is also a reinforcement of the progressive European policy of expansion (What is the main driver for the EU expansion?) based on the idea of open borders and free trade.

The last 20 years of economic growth show that the choice was correct and Europe has been living a long period of prosperity and peace since the end of the financial crisis that began in 2008. This growth was transferred to the population by more social programs to reduce inequalities and give better opportunities to each individual. Investments in this area increased, but are being comfortably funded by the economical development and EU's money transfers to less developed countries that are joining or joined the European Union community.

Because of the actual situation, it is expected that the countries of the Mediterranean Union that are not part of the EU will also receive social investments, distributing the wealth that is being accumulated in the last few years. As a direct consequence, EU's influence will become stronger in the region, creating even more close ties with those countries.

Large investments in sustainable sources of energy (Alternative sources of energy) helped Europe to be less dependent on oil and gas and, at the same time, created many jobs in Morocco and Algeria with its extensive solar panel farms. It also secured its supply of fossil fuels through geographical access. The European Union accepted Turkey as one of its members, which streghtened its ties with the Middle Eastern countries. This also helped to reduce the threat of terrorism and facilitated dialogue with the countries of the region.

But, another challenge is just beginning: as the European Union became more and more integrated, the interactions among countries became stronger, and even a small event in one country could cause a big impact in the neighboring areas. Because of that, a new type of governance was created and will begin to be adopted. That was named network governance, and the basic concept is to give seats in the parliament of one country to representantives of other countries, so they can participate in the decisions that can cause trouble beyond its own borders. This new concept still needs to be tested but seems very promising.

With the end of the Financial Crisis, a stable and increasing economical growth started all over Europe. Money that was being used to fund the financial institutions started to be invested in long-term policies to develop the recently admitted countries to the same level of the old members.Investments were basicaly in infrastructure, productive sector and real estate, which promoted significant economic growth in those countries. Investors from Western Europe were very satisfied with the return on their investments

During this period, unemployment rates were relatively low compared to levels during the crisis and the new economic boom was demanding both skilled and non-skilled workers all over Europe. Therefore, immigrants were attracted by the promise of new opportunities in a stable environment.

This new acquired wealth was also used by Governments to support the development of sustainable sources of energy. This decision was received with great enthusiasm by the public opinion, which was very concerned about the future problems caused by the global warming. That decision had another strategic reason: the desire of the EU to become less dependent on Russia's oil and gas (Energy Scarcity in Europe). The possibility of becoming hostage to Russia's supply threat became very clear after the Ukranian case (Russia–Ukraine gas disputes), when Russia simply turned off the pumps to demand an increase of price. Government's policies of incentives led to companies starting to invest in this business, with some solar farms being created in North Africa to initially supply energy to the Southern part of Europe.

New regulations regarding CO2 emissions were also approved, restricting more the amount of C02 that each company could release to the environment. All those measures protecting the nature were a result of increasing concerns about the future, especially because most of the coastal areas of Europe would be affected by an expected raise in sea level due to global warming.

Later in 2012, Turkey's pledge (Turkey Joining the EU) to become part of the European Union was accepted. There were some public protests from both sides, but those were considered as being promoted by minorities affiliated to extreme right wing parties and were easily controlled after a while. This new partnership proved to be profitable for both, because EU gained a fast growing market with a better access to the Middle Eastern countries and Turkey started to play a fundamental role in this integration, receiving many investments from Western companies aiming to reach that area.

Newly developed technologies in wind and solar generators, made even more viable the use of these alternative sources of energy. As a result, increased investments in solar farms in North Africa. Morroco and Algeria would be the most benefitted countries, because of their close ties to Europe (France in special) that were created by the african immigrants. EU governments were still investing a high sum of money to further improve sustainable technology and European countries became a global reference for sustainable energy generation.

Those investments increased the desire for better integration and revival of the old plan of a bridge joining the two continents. Feasibility studies begin and the EU is prepared to fund the project subject to the approval of all members.

Growth would continue EU would become more influential. Threat of terrorism would decrease because of integration with the Middle East, led by Turkey. The EU influence in Africa would stand increased during this period but for few contentious issues because of past colonization. But the African population in general would benefit more.

Some rumors of a possible Mediterranean Union began to rise and parallel discussions started, especially from France with their former colonies in North Africa. Turkey also led another group trying to create stronger bonds with the Middle Eastern area. To demonstrate the EU was supporting this new plan, some border controls were relaxed and more trade agreements were signed by EU with individual countries of the region.

Immigration from Africa would reduce to an extent, because of the European investments in Africa. It had a good and a bad effect. Both regions would be more co-operative and open in terms of trade and relations

As the connections among countries grew stronger, small political decisions in one place began to cause changes in other areas. Because of this close correlation, EU began to discuss a more integrated political policy among its members, the so called Network Governance.

The building of the bridge connecting Europe and Africa finally started in 2023. Despite some opposition, the project was defined and was given priority by EU, with France and Spain putting their commitment with this big project.

The talkings about the Mediterranean Union were very advanced at that point in time, with Turkey leading the Middle Eastern and France leading the African conversations. It was just a matter of time until they could find a common point of agreement.

Economical growth was still happening, and the possibility of an energy scarcity was pushed away with more investments in sustainable generation and also with newly signed agreements with African countries to supply oil and gas to Europe. Those agreements, together with the supplies that were coming from Middle East were more than enough to sustain EU's growth.

EU's expansion continued and some countries from East Europe are now part of the Union. Russia was still an independent country but the region was politically stable. Russia and the EU were big markets and the trade & political relations were healthy.

Network Governance was still under discussion, especially because of concerns regarding sovereignty of each country. A number of regional groups of countries, like BENELUX and the Nordic Countries, were studying the proposal in more detail because, sometimes, a country's decision was influencing its neighbors, forcing an unexpected change of plans in the affected area. In 2025 a pilot project of Network Governance was introduced for the BENELUX countries.

The Euro-African Bridge, connecting Europe and Africa, was completed in 2029 but its official opening ceremony was only in 2030. This date was chosen to coincide with the signature of the Mediterranean Union treaty. With this new economical block, which has countries in Europe, Africa and Middle East, the European Union expands its area of influence outside the European continent.

Because of this increasingly closer relationship between the two regions, immigration rules were relaxed and travel within these geographies were made easier.

This new set of countries has a high probability to later be unified with the European Union. If this happens there is a great possibility that EU would be the new Super Power, surpassing USA.

The concept of network governance still divides opinions but the BENELUX area had been using it for a couple of years and the results are good. In the beginning there were fears of big interferences among the countries, but those were solved with clear rules that were adopted by all three countries. Based on the demonstrated success, the Nordic area began to use the system in 2028 and is able to bridge more loopholes in the system. All remaining countries in the EU are following the results and there is a possibility of this system being adopted throughout the EU. 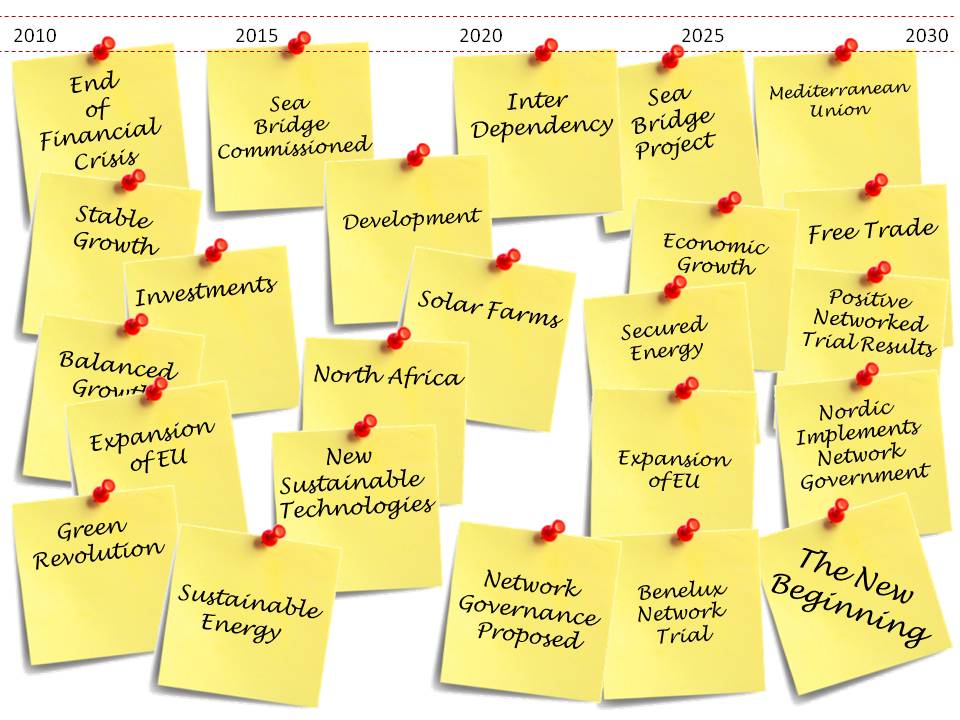