The population of Europe as a percentage of the world population is rapidly decreasing and is expected to decline over the next forty years. The "greying" of Europe specifically refers to the increase in the percentage of Europe's elderly population relative to its workforce.

The average age of the population in Western Europe will increase significantly in the coming decades. Figure 1 gives the essence of the problem in the Netherlands (Source: Centraal Bureau voor de Statistieken - CBS). 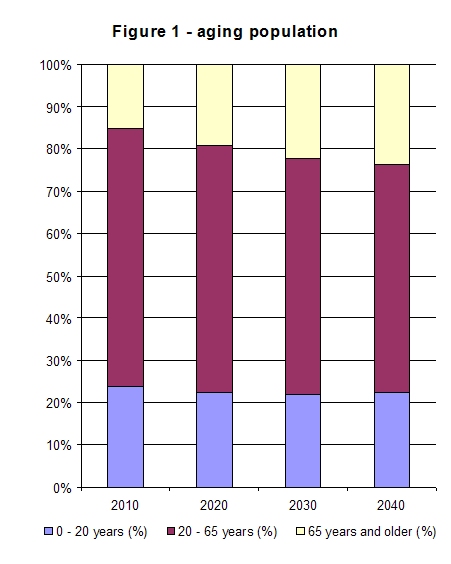 The same trend can be observed in most of Western Europe.

Aging population is a driving force, which, for example, is driving Europe to accept Turkey into the EU. With the improved health care, the population of the world is living longer, which means that the world needs more resources to support this growing part of the population. The birth rate however is diminishing and resources are therefore limited and scarce.

High expecation is placed on new technological innovations to provide solutions for confronting the problems caused by aging population.

The global balance of population has shifted significantly between 1950 and 1995. It will change even more dramatically between now and 2050.

Hence, one century of population growth will completely reverse Europe's and Africa's position: Europe's share of the global population in 2050 will be the same as that of Africa in 1950 - and vice versa. If the UN medium variant projections turn out to be correct (and there is no sign that they may be wrong) we have to expect a dramatic change in the global balance of population: A much bigger share of the world population will live in Africa South of the Sahara.
In only some 50 years Western Africa, for instance, will have the same population as all of Europe. Eastern Africa will have many more people than all the countries of South America, the Caribbean and Oceania combined. 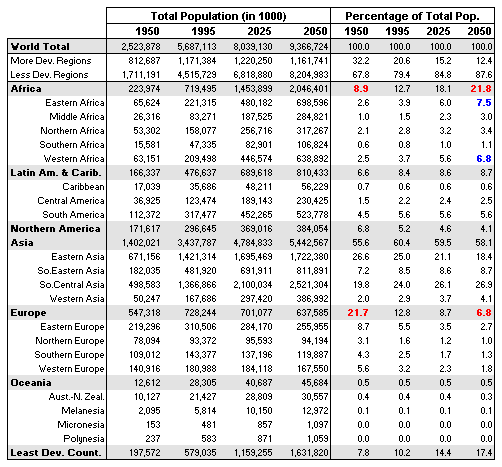 - A pandemic flu might strengthen this, since recents deathly victims of this flu were in the age range of 10-40 years

- Decrease in price of expensive drugs due to competition / patent break

- Population of developing countries and immigration

- The Cost of aging population will become so that health care fin. Systems based on solidarity can not function anymore.

There has been enormous concern about the consequences of human population growth for the environment and for social and economic development. But this population growth is likely to come to peak and then decline in the foreseeable future.

In order to maintain our current 'care society', an increase of tax payment and pension payment will have to be implemented. It is therefore doubtful whether the current care society can be maintain.

Good Nutrition: It’s a Way of Life made by Ikk Hur