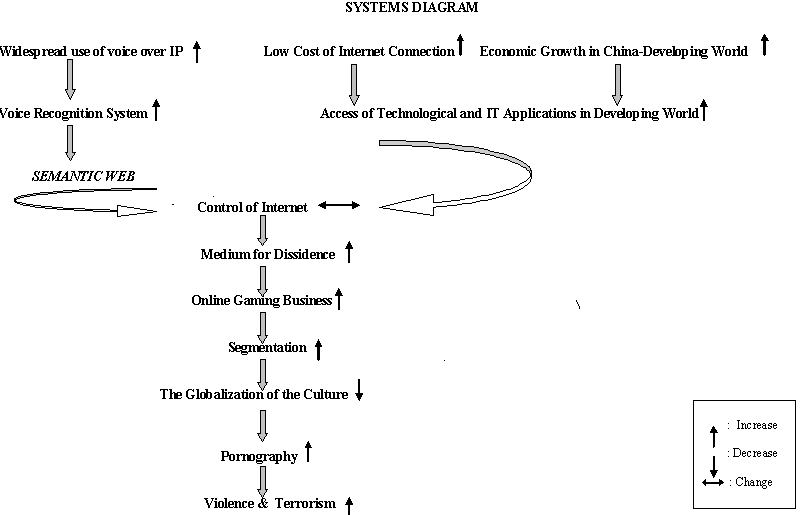 After reading, watching and writing so much about McLuhan, my story for future of internet is hugely benefited by his thinking. For McLuhan, everything (and I mean everything) is a by product of the meeting of technology and the senses. Any changes in the hierarchy of man's senses changes man himself. In line with this theory, it is possible to conclude that Tribal or audile-tactile man will be the ultimate communitarian because of the sense of oneness he has with his immediate surroundings--the result of his reliance on his hearing and sense of touch. Man's return to tribal, sensorial balance started with the telegraph and will be completed with internet—which is expected to be audile-tactile and semantic, and not primarily a visual technology. Widespread use of voice over IP and Improving voice recognition systems are important driving forces that will introduce Semantic Web wherein one's sense of self and community is established through hearing. Visually these communities make for a small world village, but hearing, or rather listening will connect the present with the past and each member of the tribe with the whole tribe.

Technological developments are expected to facilitate connections between people in virtual world village not only by changing the man’s sensorial life, but also by lowering cost of connection to the internet.

On the other hand, economic growth in the developing world mainly in China will enhance access of people to technology and IT Applications. Once the planet is fully wired, existing power structures will crumble and the concept of power to the people will become a reality. As a result, control of the internet and information will change hands. This will be a renewal of the power of the individual. As Karl Marx talked about the blissful future; the tools and the means of the production will be in the hands of the workers. As more and more people acquire home computers and are able to publish and broadcast information, control of the economy will shift. As a result we will all become infocontrollers. Anyone will be contributing to the global memory. People who now feel left out and powerless will take power. This is already happening in media and communications. In this regard, what is currently happening in China can be considered as a good example of the future. Internet has an influential role in China's public life. As per research results, about one-fifth of Chinese netizens regularly use the bulletin board systems (BBS), the most politically active place in Chinese cyberspace. The BBS provides unprecedented opportunities for Chinese netizens to engage in public affairs. In 2003, there were more than half a dozen of those online uprising events. This online communication has had a significant impact on Chinese society by providing public with the opportunity to participate in and express opinion about policy and social issues. The Internet has become a means for citizens of closed countries to have contact with external ideas, even when officially prohibited by their governments. In my opinion, online systems like bulletin board systems will provide people new grounds to discuss, exchange opinion and form virtual communities and localities. Therefore Internet users, when entering to the web, are not only looking for more information or just to excitement but also identifying themselves within specific groups creating segments. This will create cultural segmentation. Online games are also expected to shape the thinking of young generation and contribute this segmentation further. Therefore, Web will not create a supernational culture that will crush local varieties. But it will create virtual localities and it will create a world based on interglocalism and hyperlocalism. As a result, Web technology will be controlled by very few hands. It will lead to a further domination of our life by market forces. Monopolies of the means of transmission confer monopolies of knowledge As online gaming and entertainment business enhances, we will see electronic media as annihilating local culture. Why do you think the Ninja Turtles and the Mighty Morphin Power Rangers wear masks?. Because they hide national identity, racial identity, sometimes even gender identity. Entertainment can no longer break even without appealing to a foreign market. Which means a concentration on that which doesn't need to be translated: violence and explicit sex. As a result the Internet will be a very violent place. The technology will be driven by thrill-kill games of ever greater sophistication, the pornography will be easily the most vile to ever become readily available. Since the electronic media will be making the body obsolete, the masses will be socialized by images rather than by fellow human beings. By investing so much time in electronic images, individuals will lose patience with real people. Violence will be easily transformed in the global village, especially through games. Researchers have reported evidence to suggest that violent computer games among children and adolescents could increase the priming and elaboration of aggressive thought networks, weaken inhibitions against aggressive behavior, and increase acceptance of the use of violence to resolve conflict.