By the start of 2005, 3G systems were already well established in Korea and Japan and were finally showing up in Europe and America. China was booming while the United States was facing a devaluing currency and Europe stagnation. Due in large part to immigration restrictions, technology firms were growing quickly in India and China.

By 2007, East Asian economies were roaring. Chinese customers were hungry for the latest devices, in large part to show their social status. Months and sometimes years later these new technologies would be adopted in Europe and America. The costs of internet connections had continued to drop, meaning almost everyone in developed countries had access to high speed connections. Unable to buy their way into booming East Asian markets due to their very weak currency, and unable to find enough talented employees at home, American firms had pioneered the concept of the “virtual office” where there was no office, but everyone telecommuted and corresponded electronically. British, Japanese, and Scandinavian firm also began to use the same concept, though in much of continental Europe the concept was still greeted with suspicion.

By 2009, the virtual office was the reality. In some European countries like the Netherlands a combination of inflexible immigration laws, a now very old population, and a resistance to this sort of technological change had led to economic collapse. In most countries however, firms had no “place.” They simply existed seamlessly across borders. The nature of the devices being offered changed. People, freed from the tethers of their car and office, now wanted greater freedoms still. They wanted to work on the go, and on the beach. Mobile IP was used to allow people to effortlessly move between their homes and outside locations.

In 2011 a worldwide economic slowdown came into effect. A bubble had formed around the new companies. Freed from various largely fixed costs, investors assumed companies would become increasingly efficient. They had also pumped huge sums into technology and telecommunications firms which had been so central to the changes. With firms so linked globally, there was nowhere to escape the downturn. Every economy saw trouble. With few immigrants to scapegoat, Europeans and Americans began to blame the whole system, and erect barriers to cross-border firms. This pushed the crisis deeper, and caused even more firms to fail.

By 2013 the crisis had subsided somewhat. People had realized that their entertainment was as tied to the internet as their workplace. While they were willing to destroy the fundamental building blocks of their economy, they were unwilling to remove their access to their favourite entertainment programmes. While the development of the internet had stagnated, the trend of blaming technology for all of life’s problems had subsided. 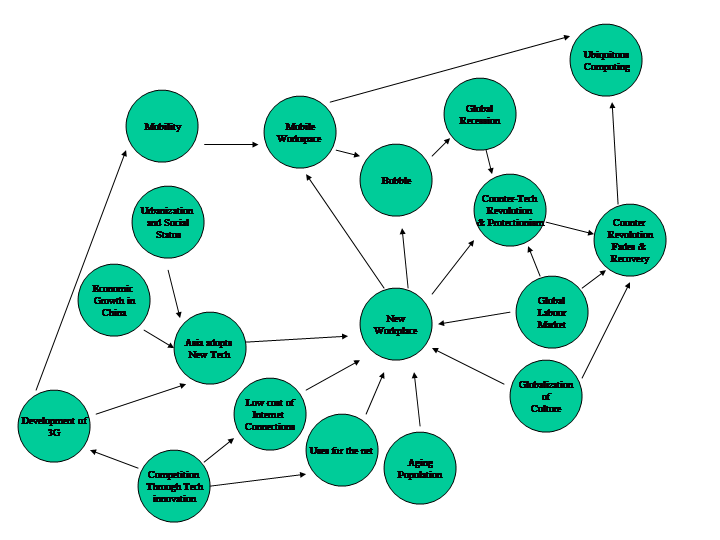