From ScenarioThinking
(Redirected from User:Ning)
Jump to navigation Jump to search

PPLive: Product of the future

My choice for a product of the future is "PPLiv" which is a peer-to-peer streaming video network created in the People's Republic of China.

How does it work?

It is part of a new generation of P2P applications, that combine P2P and IPTV, called P2PTV. All of its TV program signals are transmitted from cable television network to the internet by digitalization if needed. 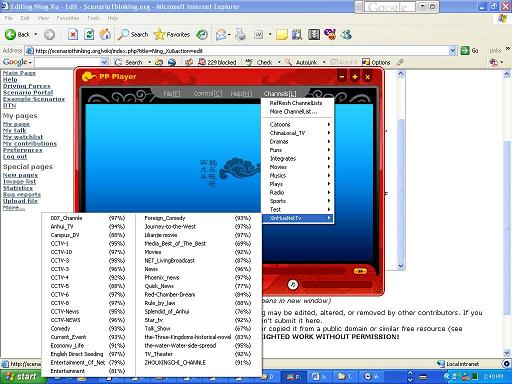 With the popularity of broadband network and P2P technology, users can now watch streamed television programs from their computer screens. Furthermore, a lot more programs are recorded and replayed on the P2P TV network like some of the airing American hit shows such as LOST, CSI, Desperate Housewives etc. The whole video stream on this network are contributed by all its users and no one is heavily burdened for downloading or uploading.

However, this program is almost only well-known to mainland Chinese users and most of the TV programs are from local Chinese stations. But as the developers launched its English version, more and more overseas users are joining in this network and foreign programs like Star Sports and National Geographic have been newly introduced into their test channel list recently.

As illustrated by the P2P technology itself, the more users use it, the higher quality and streaming speed the users can enjoy. My opinion is that in 3 or 5 years, this program can cover almost 90% of Chinese local TV programs and some major foreign channels too like CNN, BBC, Discovery Channel etc. Therefore, only the revenue level gained from advertisement will be soaring high due to the large population of Chinese internet users which already exceeded 10 million in 2005.