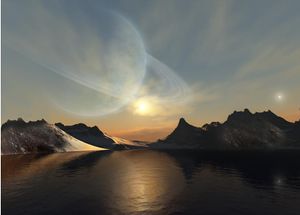 It is commonly recognised that the power of complex statistical models is becoming limited for explaining past behavior, or to predict future trends. Since these models focus only on past ‘events’, they have little to say about tomorrow’s complexity and are therefore reactive.

On the other hand scenario thinking is fundamentally different. It is an explanatory process creating a new language, and new and distinct images of the future. In scenario thinking, past events do not dictate future behaviour; instead, they are the products or snapshots of behaviour. What really causes behaviour is interactions between the elements of the system.

Scenario thinking coupled with scenario building, constitutes a generative rather than adaptive learning process. Once the behaviour of a system is understood, the patterns of behaviours are expressed in stories, the relevant research has been done, and the driving forces have been identified, it is possible to talk about a few events or snapshots that will guide further scenario building. All these components of scenario thinking create a common language between participants of the scenario building team and bridge their often divergent thinking. Below, these aspects have been elaborated in detail, in relation to our scenario building efforts for the Future of the Internet in 2015.

Storytelling: Cognitive psychologists describe how the human mind, in its attempt to understand and remember, assembles the bits and pieces of experience into a story -- beginning with a personal desire or a life objective -- and then struggles against the forces that block that desire. Stories are the best ways to remember, since we tend to forget lists and bullet points. Stories are also the best ways to imagine the future. You create scenarios in your head about the possible future of the Internet in order to try to anticipate the effects of Internet technology on our future lives.

Essentially, a story expresses how and why life changes. It begins with a situation in which life is relatively in balance. We expect this balance will continue on that way. But then there's a sudden – relevant, plausible, consistent or surprising - event that alters this balance. The story goes on to describe how that change will occur, in an effort to restore balance with subjective expectations. Successful storytelling describes what it is like to deal with the opposing forces, work with scarce resources, make difficult decisions, take action despite risks, and ultimately discover the truth. Like all great storytellers throughout time - from Shakespeare to Bill Clinton – we have dealt with this fundamental conflict between subjective expectation and cruel reality, during our efforts to anticipate the future of the Internet.

One of the biggest advantages of storytelling as a part of scenario thinking, is to understand that we all live in dread. Fear is when you do not know what is going to happen. Dread is when you know what is going to happen and there is nothing you can do to stop it. Ever since human beings sat around the fire in caves, we have told stories to help us deal with the dread of life and the struggle to survive. Scenario thinking is the most modern way of doing that. In the process of building the four scenarios for this project, the group used storytelling extensively to understand and facilitate the process of scenario building. Our efforts resulted in Scenario Snapshots. System thinking was also heavily employed.

System Thinking: Peter Senge, in his famous work “The Fifth Discipline”, emphasised that “At the heart of system thinking is a shift of mind – from seeing ourselves as separate from the world to connected to the world, from seeing problems as caused by someone or something ‘out there’ to seeing how our own actions create the problem we experience.” The theory of being part of the whole can be fruitfully applied to the future of the Internet, in order to understand related system dynamics. The underlying message is that systems determine behaviour, and people can learn to identify what has to be done to deal with the problematic behaviour by engaging the system and understanding how it behaves.

At the foundation of systems thinking is the identification of circles of causality and feedback loops. These can be reinforcing or balancing, and they may contain delays. A number of systems structures or patterns of relationships can be commonly found in a variety of settings. Some of these are ‘Balancing Process with Delay’, ‘Limits to Growth’, ‘Eroding Goals’ and ‘Growth and Under-Investment’. A practical example for the future of the Internet would be a combination of all these patterns. Think of a situation where Internet service providers suggest that the only way to respond effectively to the increased demand for Internet services would be by increasing technological capacity, i.e.- bandwidth. Although this insight is not particularly dazzling itself, when coupled with an evaluation that in the absence of resources to increase capacity, there would be an erosion of the quality of services.

The diagrams were one of the most helpful instruments that allowed us to see inter-relationships, causalities and conflicts among the driving forces that are shaping the future of the Internet.

Research: Much of what we understand today about new technology and media in society builds on the prescient insights of communications theorist Marshall McLuhan (his official website). This is why our scenario thinking for the future of the Internet has been highly benefited by the pioneering concepts of McLuhan (wikipedia) , such as the "medium is the message" (or as he put it, the "Media is the Massage") and "the global village” (see our class' McLuhan Critical View). McLuhan saw the new direction in which civilisation was suddenly headed: electronic technology shapes us, and the type of technology we use has more impact on our thinking than the information it carries.

Driving Forces: The Internet revolution, still in its nascence, is already exerting an enormous impact on culture and the way we live, just as the telegraph - and later the telephone — impacted society in previous communications revolutions. The phase of growth in the Internet is currently evolving significantly by the ongoing development of information technologies into a coherent whole. Unlike the previous linear and sector-differentiating progression of structural upgrading in which a new independent industry (for example, automobiles) becomes dominant as a leading sector without much affecting and being affected by yesteryear's leading sectors (say, textiles), the Internet industry impacts and is being impacted by all the areas of social, political, technological and economic environment. These are the Driving Forces that were identified and used to create snapshots by the scenario building teams.

Snapshots: In 1966, McLuhan told an interviewer: "I'm resolutely opposed to all innovation, all change. But I'm determined to understand what's happening because I don't choose just to sit and let the juggernaut roll over me. Many people seem to think that because you talk about something recent you're in favour of it. The exact opposite is true in my case." The intent of McLuhan, as well as of scenario thinking, has been to shake us out of passivity. It is believed that by knowing how technology shapes our environment we can transcend its absolute determining power. McLuhan wanted us to tune in and take charge, and through building snapshots we were just doing just that. Our scenario thinking efforts on the future of the Internet should be credited with teaching us to deconstruct the current communications phenomena and their social, political, economical and technological aspects.

If we had the chance to ask McLuhan react to the sudden onslaught of the newest electronic media, he would probably urge us to pay attention and start developing our scenarios right now because the situation is becoming urgent. Take a look at our Scenario Snapshots.

Click here to return to Group 4: The Scenario Logic