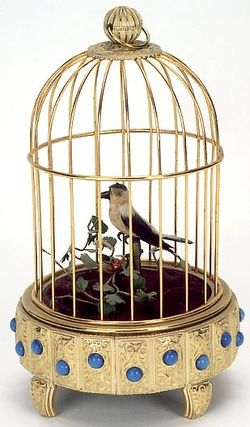 The Gilded Cage refers to a person who is trapped and has restricted or no freedom, but still has very comfortable surroundings. 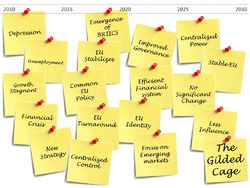 The year is 2030 and the EU was able to create a unique identity for all its residents. Though the EU has succeeded in integrating its member states and keeping its membership intact, it is a far cry from the economic and political progress that its creators had envisaged.

The central government in Brussels is gaining more power as the European Parliament becomes stronger. Another reason for this increase of power is based on the previous experiences during the financial crisis of 2009, since it became a consensus that this approach of an unified government and policies is the best solution for the EU.

European standards of living are still among the highest in the World but at a cost of a slow economical growth. Because of the region's policy of focusing primarily on the citizens' welfare, labor costs became too high for some industries and jobs are being created in numbers only enough to follow the demographical growth of EU.

The growth of the emergent economies of BRIICS (Brazil, Russia, India, Indonesia, China & South Africa) shifted the global focus from EU to these new regions. The EU, at this point, held lesser significance than the fast developing countries. The spotlights are no longer on the European Union.

Since then, the EU's economy has been stable and the political environment continues to be progressive, but the growth is sluggish, leaving the EU a shadow of its past.

The economic crisis that started in 2008 had a significant impact on EU. The crisis turned out to be a longer drawn battle than was initially thought. The massive funds invested by the developed economies in bailing out its financial and manufacturing sector did not reap much dividends. Law makers believed that the economy would recover by 2010, but after showing a minor sign of recovery the economy spun into a long depression. Unemployment rates reached all time highs with a huge impact on the political climate (Institutional & Bureaucratic Dynamics).

The developed countries in EU registered negative growth for 3 consecutive years with a rising fear of this turning into a norm but, finally, in 2012 the situation was stable. There was still no growth but, at least, there was no more damage with a negative number. The UK, Germany and France were no longer the biggest influencer's of EU policies. But, still the smaller EU economies lived in the hope of a quick recovery and overall development across the EU.

The Rest of the World (ROW) was concerned about these developments and worried about its trade and political relations with the EU especially if the EU's economy continued to drift south.

After that period the region started to slowly recover, but a return to the previous standards of the economy would still take a long time.

During the worst of the crisis, some countries started to point fingers and blame the others for their financial and economic situation. That was seen as a possible sign of the degradation of their relationships and understood as a possible threat to the future of EU. When the worst period of the crisis was over, in 2012, the European Parliament began discussions regarding a completely unified policy and direction for the EU area. The project generated much controversy as one of the proposals was the creation of a central government in Brussels, from where all key decisions would take place.

With the slowed down economy, immigration also reduced but some right wing parties still used it as an argument to suggest radical transformations in the EU regulations and policies. They also blamed the competition for jobs as a problem created by those immigrants. Most of the population did not agree with the allegations, but there was an increase in the support for those parties. To avoid political problems, the acceptance of Turkey was delayed one more time but commercial agreements were signed between the country and some members of the EU. By doing this the relevance of its acceptance or not in the EU was diminished as Turkey now had access to part of the European market.

During this period, investments in renewable energy were drastically reduced and most projects were put on hold until companies and Governments had a better perspective of the future. It created some discussions within EU, especially those concerning CO2 emissions.

By 2015 the Asian economies, and in particular BRIIC economy's, were roaring. China was already on the verge of dethroning the US as the world's largest economy. With a GDP growth in double digit the focus of the World was on China.

The EU had by then managed to drag itself out of the recession, but there was still a lot of ground left to recover. From being a huge exporter, the EU turned into a big importer. Its dependence on the emerging economies increased substantially during this period.

Though the economy seemed to be unstable the smaller EU nations were still happy to live under the EU umbrella as they felt it was the safest bet for their survival and development. The situation triggered more co-operation among EU members and the EU was able to establish a strong identity. As all member states learnt their lessons from the crisis, EU was successful in pushing thorough common and stronger policies of governance.

Towards the end of 2020 EU members started registering positive growth, though minuscule in comparison to the growth registered by the developing economies. The developing economies had cheap labor as one of their key resources and continued to be the manufacturing hub for the developed world. Consumers in Europe were no longer willing to pay higher prices for their purchases. They desired to have the best products at the cheapest rates. This also triggered more manufacturing moving towards developing countries in Asia, Africa and South America.

Another fear appeared at that time because an oil crisis could happen unexpectedly and fossil fuels were still a big influence in the prices of goods. The reduction in investments on renewable energy held the development of new technologies that could had helped EU to be less dependent of oil and gas (Alternative sources of energy). Some Middle Eastern countries had been preparing themselves to change their main source of revenues from oil to a more long-term and sustainable source, which gave an important sign for the market.

The interest of joining the EU decreased substantialy because of the slow growth of the region. Another reason of that was the talkings about the central government. The idea was becoming stronger and not all countries were willing to transfer their decision power to a place out of their control with people who were not elected by their population. That was something unthinkable for some of the members, but for some this could be a reasonable proposition after several adjustments.

Despite those discussions, an increasing share of the population was seeing the central government (Supranational Union) option as a viable one. They did not want to live another depression period and wanted to live their lives in a stable and safe environment. Scarce jobs and the threat of an oil crisis were driving their opinions.

With better governance the EU's financial system started to become more robust. The EU realized that the best way to survive was to ensure better cooperation within the Union. There was a stronger push towards standardization of legal and fiscal policies. The European citizens also started to realize that the emerging economies had become the forerunners of the world economy and that Europe did not have as much clout as before. They started to feel a sense of belonging to Europe as they saw that their individual nations could no longer survive alone. Thus, a central Europe started to look like a reality for the first time and Brussels started to gain more power as more and more countries agreed to accede more power to it.

However, as this sense of European identity grew there was also a push towards making immigration into the EU harder. The European citizens started to feel that the people from emerging economies had no place in Europe as their own economies were doing well and they were the reason for the loss of Europe's might. Thus, though EU was technically still open to immigration, the immigration laws became much more stringent.

Another problem that increased this inward look was internal migrations that happened in some countries with long coastal lines caused by the global warming. Those people needed to be relocated and each government had to deal with their population's needs, making harder to spend time looking at other country's needs.

Those set of situations caused the whole EU area to become more isolated, since there was not big interests from the other countries to come to the area, and also there was not much interest of the EU to divert its funds to invest externally.

By this time, Brussels had become the real political capital of Europe and the only real seat of power. During this period the whole EU managed to return to positive growth rates as a result of political stability and good fiscal and monetary policy decisions by the ECB.

However, in spite of this new found stability, the EU was still just a shadow of its former self on the world stage. The European citizens though did not see far beyond their borders. They were content with the new system as long as they had adequate social security and could live their lives in comfort.

At the level of governance, the EU realized that a lot had changed on the world stage and the political and economic dynamics had changed considerably. The developing nations remained in the limelight and the EU was wise to recognize this shift in power and the geo-political climate. 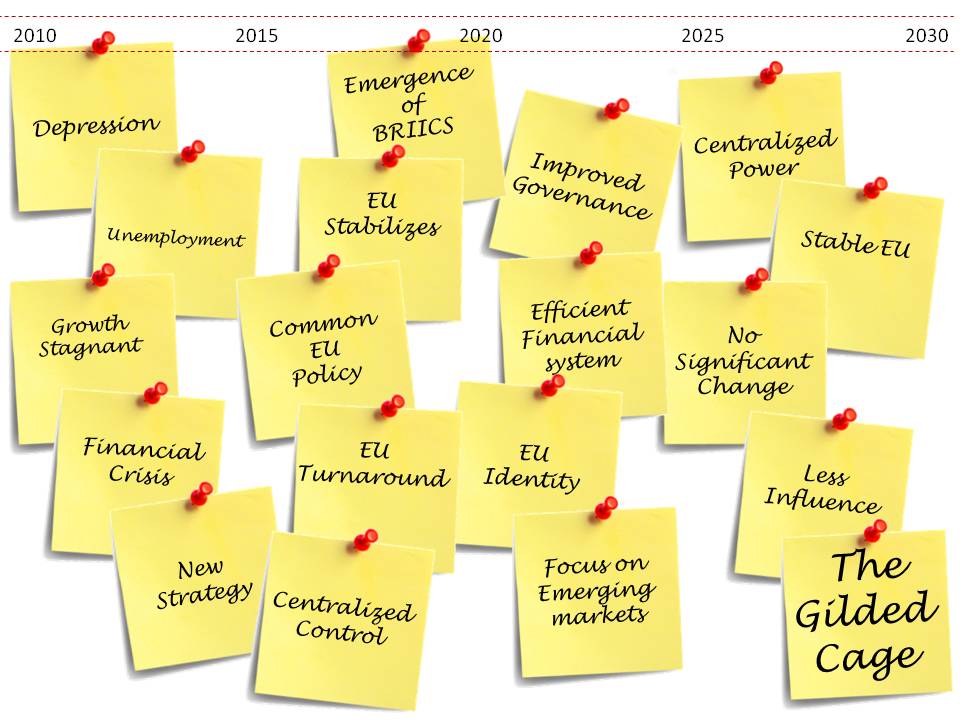