The Future of the Global Village in 2020 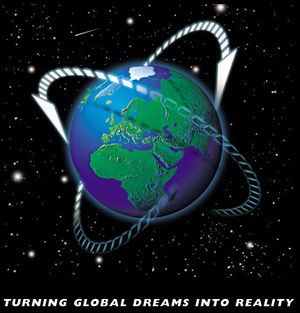 In the introduction to McLuhan's Understanding Media he writes: Today, after more than a century of electric technology, we have extended our central nervous system in a global embrace, abolishing both space and time as far as our planet is concerned.

The basic precepts of his view are that the rapidity of communication through electric media echoes the speed of the senses. Through media such as the telephone, television and more recently the personal computer and the 'Internet', we are increasingly linked together across the globe.

He concludes we are forced to become aware of responsibilty on a global level rather than concerning ourselves solely with our own smaller communities. He writes: As electrically contracted, the globe is no more than a village. Electric speed at bringing all social and political functions together in a sudden implosion has heightened human awareness of responsibilty to an intense degree.

Issues of the changing world

In this section we try to find some important issues emerge recently. Knowing these issues will be usefull to understand the present situation of the world in a global scale. When an issue emerge, how it emerge, who involve in the issue and the interaction between them are some key question we try to answer. We devide those issues into five general categories as follow:

In the 1960s Marshal McLuhan pointed out how media could change humans and everything surrounding them. Media has a big influence on how we perceived the world. In his book "Medium is The Massage", he revealed "The new electronic interdependence recreates the world in the image of a global village". How actually media will transform the world into the so called 'Global Village' and how we describe a global village? In this section we collected some questions related to uncertainties of the world in the future with regard to the idea of global village.

Based on uncertainties we found, we finally came to some key factors that have dominant influence to the uncertainties. By knowing those factors deepper we could understand how and why these factors so prominent and whether they can be considered as the driving forces to the future of the Global Village.

Driving forces are prominent factors that drives the likelihood of an event to take place. In case of Global Village, we eventually concluded from our research that the 'Global Village' is an iceberg of some phenomena below.

In this system diagram we would show you how interactions of actors in a global scale look like. It tells us how media, internet, culture, international trades, etc. interact and influence each other. Why this interactions take place, what are the motives behind them, and which actors/entities have the most power to influence the others are extremly important questions to be explained in order to construct scenarios for 'The Future of the Global Village'. 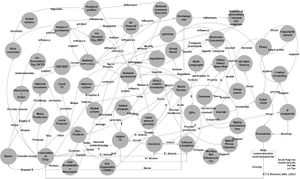 This diagram shows the 'big picture' of the complex system diagram. It is aimed to give general sense of what is happening on the system in a broad scale. 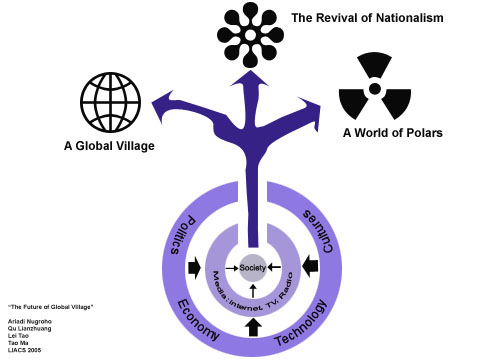 How this world would be look like in year 2020? Only heaven knows! But as we have mapped in the system diagram, at least we could develop three scenarios that will probably best describe what will going to happen in the future. These scenarios will give a general view about how political forces, economics transactions, role of media, and, not least, the internet, support and reshape a new world order in a totally different world that we might never imagine before.

Presentation Feedback
I like your argument's build up!
Show not just the end state, but also how we came to to be in that world
could not see if you have done this:
- show in the Nationalism scenarios that economic growth for example slows down
- show in the globalisation scenario the environmental devestation/(crash?)
We talked about fragmentation to sub nation state states, It might be stronger to than using the nation state as the smalles size. i.e. the next step is Global, or Europe, or Baque, Catalan, etc. rather than Spain.
Show the forces that coudl drive one or the other world