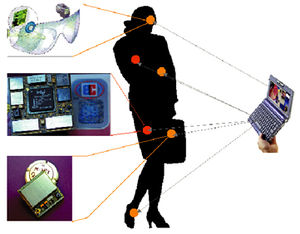 Wireless networks have ultra high speed and were expanded to places that did not commercially justify installing the traditional telecomm infrastructure before, especially in developing countries. However, ubiquitous networks where computer devices became embedded in the fabric of people’s lives, emerge in advanced countries. People rely on those networks for work, entertainment, communication, and to manage and run their lives. They are connected to the Internet with the computing devices all the time, everywhere. People’s understanding of computing devices changed, because computing power is no longer confined to the PC or laptop. In the ubiquitous network, computing functions such as Internet access and data management, converged into micro devices that allow people to depend on computing all the time. Embedded micro computers take on more PC-like characteristics and are able to communicate seamlessly with each other via wireless networks, which act as a central store for people’s personal information. As computing devices have become very small, they disappear into the background of people’s lives. People are surrounded by computing devices but are less conscious that they are. The economics of computing technologies changed as well. We are able to produce more micro computing chips at a lower cost, which enable manufacturers to install intelligent chips into mundane items. For example, your fragrance diffuser which has stored hundreds of fragrances stimulates your daily mood and is activated via the Internet. Researchers around the globe explore new ways to reach Real Net by combining micro computing devices and all attributes relevant to human sensibilities. After the cooperation of MIT and Microsoft failed to bring new marketable products to fruition, new ways of cooperation are sought with the Tokyo Institute of Technology (TIT).

The embedded devices to access the Internet are far more ergonomic, natural and intuitive, and contribute to improve the efficiency of advanced countries’ economy. Furthermore, the new business opportunities created by the ubiquitous market accelerate the user rate and in total the global economy. Although developing nations do not enjoy the benefits of ubiquitous computing yet, ultra high speed wireless technology reduces their infrastructure costs, thereby promoting their access to global markets. Entrepreneurial activities in developing countries are popping up, contributing to economic power and trying to reduce the economic Divide, while challenging developed countries’ technologies.

The new era of ubiquitous network has a remarkable impact on the individuality of our society. With the ultra high speed wireless technology and ubiquitous networking, the Internet provides new opportunities for all humans and parts of the world to become virtually connected. Consequently, societal isolation occurs, because of laziness and the limitations of physical movements. Moreover, the wired ubiquitous network allows people to get involved in virtual societies or communities where governments and countries seem to disappear.

Nine years ago in the year 2003, English was the dominant language and represented 35.2% of the Internet. Nowadays, in 2012, Chinese is the most used language on the Internet. The ethnic Chinese community established its virtual government on the Internet. Just because the ethnic Chinese occupy a large proportion of the whole word population, they play an important role in all economic activities, especially in the fields of manufacturing embedded micro computing chips and also financial services. This new situation creates political tensions and leads finally to the conflict between the virtual ethnic Chinese government and real, old-fashion governments.