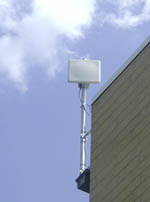 In 2008 global high speed wireless networks built by people for people dominate the connection to the Internet in the world. The computer companies have been driving an initiative for wireless networks, under a standard called 802.11. Wi-Fi and WiMAX were initially devised as a means of replacing cables or DSL, but had a far wider impact. The costs of installing a wireless network have dropped dramatically and the result is a huge growth in its use. Large telecom companies have been affected significantly by people who built this wireless broadband connectivity. The wireless network does not stop at the walls of your home. It can radiate 300 feet for old technology (Wi-Fi), 31 miles for the new one (WiMAX). The network reaches thousands or more of your neighbours who can use it for free without affecting the performance of your own usage. Thus, people in 2008 are able to have a broadband telecom system built by people. Moreover, as its performance has increased dramatically, the Internet expands to places that did not commercially justify installing the traditional telecom infrastructure before. With respect to the functionalities of the Internet in 2008, voice recognition techniques are available and also widely used. Furthermore, very recently rumors were spread that Microsoft has linked up with MIT to conduct the first experiment with sensors for all five senses on the Internet. The company has serious plans to develop the technique and to launch these sensors within the next 10 years time.

Since 2005 the world has finally come out of its long recession. The US, Europe and Japan have taken back their roles as the world economic leaders, but now they increasingly fear the role of China. Not only has China expanded its economy within its own territories, in the last couple of years Chinese companies have also expanded their operations outside the Chinese borders, especially in the Northern part of Europe and in the US many Chinese companies have been established, taking advantage of their leading cost position. IT has proved to be an important driver for the economic recovery, and thus the IT sector has clearly increased its position in the world of business and its stake in the world’s GDP. This is largely a result of increased e-commerce activity worldwide. Where earlier it seemed that the US, Europe and Japan were permanently losing their share of the IT sector to offshore countries like India and China, an enormous growth in business via the Internet, mainly in the US, Europe and Japan, has established a well spread balance in the IT industry. Still, Africa is far behind the rest of the world; however improved digital literacy and closer connection via the Internet has certainly improved the continent’s economic activity and entrepreneurial activities.

The Internet thus has a tremendous impact on the characteristics of society. People are clearly better informed and have increased their attention scope considerably. With the pervasion of wireless technology, the Internet has provided opportunities for all parts of the world to become equally prosperous. The viral nature of unlicensed communication infrastructure has become a major force for our society. In particular, it allows emerging nations in 2008 to narrow the economic divide. The Internet also seems to reverse urbanisation. Previously the development has been towards urbanisation. To be rural meant to be poor. However, now the Internet has brought the same opportunities to the rural world. Furthermore, it can be seen that the world is moving towards a virtual society. More and more social activities take place in networks and virtual communities, while at the same time borders seem to disappear. Moreover, in professional life remote working or telework gets increasingly more common.

Finally, the situation in Iraq and Afghanistan has ultimately become stable. However, it took until 2006 for the countries to have thorough and stable public facilities in place such that the US and the UN could leave these areas. As the danger of terrorism has gradually disappeared the UN and its member countries could devote much more time and money to other vital subjects taking place in the world. In these times of dramatic growth of Internet activity, one of these subjects is the development and implementation of global regulations and standards for the Internet worldwide. In cooperation with trading blocks as the EU, NAFTA, and the country governments of Japan, China and India, considerable progress has been made in the last two years with respect to security and tax regulations, and Internet governance.