More of the same(North Korea's Collapse and the U.S.-China conflct) - Group 1 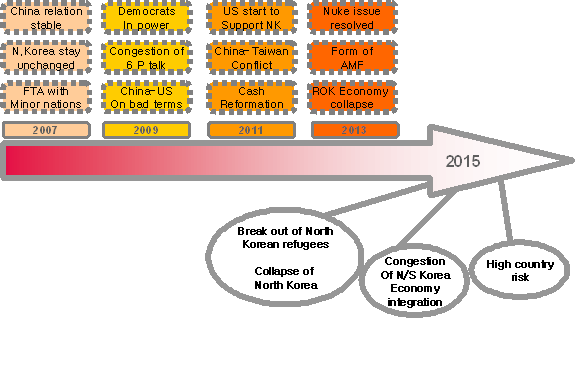 Introduction The future of the Korean Peninsula is crucial, for it deals with various important issues which concern not only two divided Koreas but also the realm of global community. The history tells us that the geological position of the Korean Peninsula draws very attention from surrounding powers such as China, Russia, and Japan along with the United States. Fortunately, the peninsula at the turn of the 21st century looked somewhat improving as South Korean government pursued “Sunshine Policy” by the means of “selfless” and “blind” financial support and exchange. However, North Korea’s possession of nuclear weapon (WMD) brought much tension to the region. The tension between North Korea (DPRK) and the United States intensified as the U.S. government’s tendency of neo-conservatism surfaced by the tragedy of 9.11 (War on Terrorism). At the same time, the worsening relationship between China and the U.S. opens a new window of possibilities which may happen in the peninsula. This scenario predicts the Korean Peninsula in the year 2015 by gradually developing our story from the year 2005 (present) and linking the suggested events to the driving forces.

No major changes occur between the year 2005 and 2007. The U.S. government is still pressuring DPRK to disarm nuclear weapons and join the 6-party talk; however, DPRK seems reluctant to cooperate with the U.S. In respond, the U.S. continues to strengthen the military power in the region by repositioning its army from the Middle East to nearby seas of the Korean Peninsula. The U.S. army stationed in South Korea (ROK) either leave for Japan to be repositioned or move further down to south below Dae-Jeon area as if they are preparing for war with DPRK. At the same time, the U.S.-Japan ally becomes stronger. The U.S. constructs a number of harbors exclusively for the U.S. battleships including the U.S.’s newest Aegis combat system vessels and aircraft carriers filled with F/A-22, the brand new, unbeatable fighter planes produced by Lockheed Martin. Despite such growing unease, ROK government still pursues “Sunshine Policy” in an attempt to maintain a good relationship with DPRK. However, as ROK’s economy does not recover from ongoing stagnation, the government’s “giveaway policy” is confronted by strong opposition from the majority of population. One of the significant achievements of “Sunshine Policy” is establishment of Gae-Sung (North Korean city near South Korean border) Industrial Complex. South Korean government has a great hope for economic cooperation between the South and North, in turn deriving a closer relationship. While South Korean economy struggles, Chinese economy has achieved solid two-digit growth for the past a few years. China’s living standard is significantly improved in selected urban areas but still remains poor in other areas. Chinese government gradually evolves to adopt more democracy and Laissez Faire capitalism which are the driving forces of China’s ongoing growth. In addition, China seems very cautious dealing with the U.S., for the antagonistic relationship with the U.S. may disrupt the successful holding of 2008 Beijing Olympic Games by which China can step up to a true global power to possibly shake the unipolar international power structure.

In 2007, South Korean government undergoes a major political transition in which President Noh Moo-Hyun (whose majority of policies tend to skew to the left-wing) passed the baton to the opposition party, Han-Na-Ra Dang (which pursue more conservative and right-wing policies). The major differences in terms of ROK’s new policies are to restore closer relationship/ally with the U.S. and to depart from a decade long altruistic “Sunshine Policy” to more utilitarian policies driven by national interest and gain. South Korea pronounces that it is willing to support North Korea by any means possible only if North Korea displays its effort to bring peace and security to the peninsula such as disarmament of nuclear weapon and participation in the 6-party talk. South Korea plans a number of bilateral talks with the north; however, both countries seem to have difficulties arriving at mutual consensuses. In 1997, South Korean economy enjoys unusual prosperity from the expectations of 2008 Beijing Olympic Games. However, the economic prosperity appears to be rather temporary (short-term), not resolving ongoing economic stagnation caused by President Roh Moo-Hyun’s policy of suppressing real estate market. Externally, South Korea formed FTAs with Mongolia and Singapore, which will bring mutual economic benefit in the long-run. On the other hand, North Korea’s poverty and famine aggravates; in turn, the signs of internal conflict and confusion surface.

In 2008, the U.S. holds the presidential election in which the Democratic Party wins. Korean government under new administration expected a relatively big change in the U.S.’s foreign policy against North Korea; however, the pressure against DPRK does not seem to diminish as expected (under assumption that the Democratic Party pursues “softer” foreign policies). Nevertheless, the U.S. administration under a new Democratic president pursues “softer” approach in terms of North Korean issues than President George Bush’s era. On the other hand, China seems to neglect the importance of 6-Party Talk, for it is too consumed by the internal problems (conflicts derived from political and economic transition caused by 2008 Beijing Olympic Games). And yet, Japan put greater importance on external issues due to revival of it economy. However, the position of Russia is almost the same as that of China; therefore, 6-Party talk seems to end in smoke. As mentioned earlier, China undergoes the second “Tian-Men” upheaval in 1989. The U.S. intervenes to side with demonstrators with the humanitarian causes. In turn, the U.S.-China relationship worsens. Such conflict has a great impact on South Korean economy due to South Korean economy’s dependency. In response to South Korea’s attempt to cooperate with the U.S.’s policies, the U.S. begins to talk closely with South Korea (rather than Japan) on issues such as various countermeasures in case of DPRK’s sudden collapse. As one of the solutions, South Korea and the U.S. secretly agrees to establish a temporary DPRK government consisted of escaped North Korean intellectuals with South Korean and the U.S. political advisors in Washington, D.C. However, the two countries cannot come to an agreement in terms of disposition of DPRK’s nuclear weapon (WMDs). Meanwhile, the relationship between South Korea and Japan is still in question as the territorial dispute over “Dok-Do” in East Sea and incidents of Japan’s distortion of history continue. On the left side of the Korean Peninsula, China is still growing at a very rapid rate with a synergy effect of successful 2008 Beijing Olympic Games. Predicted and yet surprised by China’s such rapid development, the U.S. initiates more restrictions and controls on China and its economy.

From 2009, as the U.S. realizes lack of improvements with its stubborn and hard-line policies on North Korea, it decides to take softer policies in which the U.S. begins to increase the volume of economic aid, maintaining its current position on DPRK’s disarmament.

In 2010, the U.S. and North Korea hold a summit-level conference in Geneva, Switzerland. The U.S. promises more economic aid and Kim Jung-Il’s sustenance of his regime, and in respond, North Korea promises to gradually disarm and open its gate. As the summit-talk’s relative success decorates the first pages of world’s major newspapers, South Korean economy is stimulated and begins to recover from long-lasting stagnation, enhancing the country’s credibility rating and attracting more long-term FDI. The economic and cultural exchange between the South and North becomes more dynamic. Gae-Sung (North Korean city near the border with South Korea) Industrial Complex has been in a dull state since its establishment; however, multinational and Korean major companies begin to invest to utilize North Korea’s cheap land and labor. Railway which connects the South and North through the spine of the Korean Peninsula finally opens (only for industrial purposes, not yet commercial).

By 2011, although the people of the South and North are not free to move, separate families (caused by Korean War) are able to wire-transfer their funds to each other as North Korea adopts a systemized banking system. South Korean government continues to work closely with the U.S., and at the same time, it does not neglect the China’s abundant and still growing market. South Korea is in talks with China and Japan to form a Free Trade Agreement (FTA); however, South Korean government faces strong resistance from agricultural sectors and labor unions along with Korean nationals with strong anti-Japanese sentiment. Another economic measure South Korea undertakes is currency reform to facilitate economic activity.

In 2012, North Korea shows a possibility of its rejoining in IAEA and concluding a Non-Proliferation Treaty (NPT) by opening its door to the UN officials and specialists at IAEA for various examinations. North Korea has been suffering from extreme poverty and famine for the last decades; however, international level of aid initiated by the U.N. starts flowing in. North Korea’s position in international community enhances; however, the tension between China and Taiwan/the U.S. arises as Taiwan imports military weapons from the U.S.

In 2013, Kim Jung-Il chooses Kim Jung-Nam, his troubled son, as his successor to his dictatorial regime, and at the same time, North Korea faces internal confusion as the rumor of Kim Jung-Il’s illness spreads across the country. South Korea and the U.S. hold a number of meetings at different levels in terms North Korea’s future; however, details of the agreements are not available to the public (highly confidential). South Korea, after witnessing the success of Gae-Sung Industrial Complex, commences the second project in Shin-Eu-Joo, a northern city of North Korea. Meanwhile, the tension between China and Japan intensifies due to ongoing territorial dispute and continuation of Japanese Prime mister’s annual visit to Yasukuni Shrine where class A war criminals were enshrined. Unfortunately, close relationship between the South and North seems to break apart by kidnapping of South Korean tourists at Mountain Kum-Gang. The incident came in as a shock to the countries. Consequently, well-established relationship which was achieved with great difficulties seems to weaken.

By the end of the year 2014, Kim Jung-Il’s sudden and suspicious death leads to North Korea’s collapse. Kim Jung-Nam, the successor, does not seem able to control the sudden power vacuum, and as a result great chaos occurs. As a side effect, thousands of North Korean refugees start to cross the border to the South. South Korean government takes an immediate action to strengthen the boarder to put a halt to immediate inflow; however, the hold is not strong enough to stop desperate North Korean refugees.

In early 2015, the U.S. military forces are dispatched in every corner of North Korea as a repressive measure. However, North Korean military leaders’ attempt to overtake the government and civilian riots are too overwhelming. The U.S. inevitably decides to use extreme measures to suppress coops. Chinese government takes an immediate action to enter North Korea. However, the U.S. and its allies does not approve of China’s interference in stabilizing the North. Two super powers’ tension arises as the U.S. forcefully establishes the U.S. mentoring temporary government. In addition, the two countries argue over handling of North Korea’s nuclear weapon. As the tension heaps on, South Korean economy came to a sudden recession. Sensing a great potential for chaos, the FDI stops and Korea based multinational companies begin to flee to safer countries. The sudden crash of Korean stock market leads to the collapse of major stock markets worldwide. The production line at Gae-Sung Industrial Complex stops and the Shin-Eu-Joo Project ends in smoke.