Changes in society, politics, technology, art, etc. are often only the symptoms of more fundamental transformations. For instance, high unemployment is the result of underlying forces in the labour market, which in turn are affected by such factors as the rate of productivity improvement.

Rather than working with an exact definition of a driving force what is important is to have a pragmatic approach. We start with an observable change and ask "Why?" repeatedly. Where to stop asking "why?" is also a pragmatic matter to be decided by common sense. 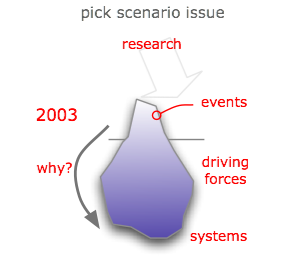 It would be naive to expect clear chains of causality. Instead what will emerge is a "web" of interrelated driving forces. This web will also not be static, but rather evolve. Over time new forces will be added, existing ones combined and/or replaced, etc.

Each driving force can be described using a number of attributes:

To produce a "DRIVING FORCE" document