Labour market conditions are mainly affected by the overall development of the economy. However, in the 21st century, labour market performance is increasingly challenged by the demographic shift. Over the next 30 years, the dynamics of population ageing will have important implications on the workforce, particularly on it's composition. Therefore the demographic shift will need a high importance on each national agenda.

A detailed overview on Aging Europe is found here. An overview on the scale of this demographic shift can be described as follows. The European working age population will soon stop growing in size. It will then gradually start decreasing. It is therefore, necessary to achieve activity rates for all groups in the working age population which are as high as possible. The below stated Graph shows that if employment is to continue to grow at an average rate of 0.6%, as it has since 1985, and the maximum (average) employment rate is 75% then the labour reserves (the unemployed and the inactive, including the early retired) will almost halve by 2015. 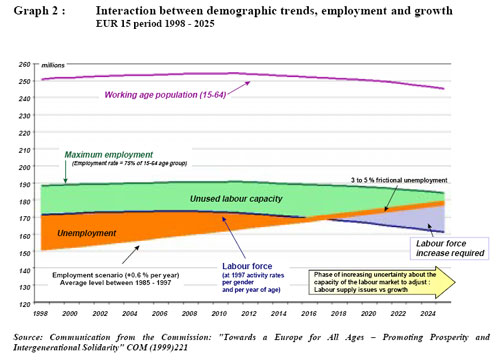 "The success in mobilising inactive human resources represents an important policy challenge since the ageing of working age population implies that participation levels will be more and more influenced by the activity patterns of the (increasing in size) older generations. Therefore, achieving higher participation rates will require substantial changes in comparison to the participation levels of these groups today."

Source: The European Labour market in the light of demographic change

Old: Europe will lag behind and will be overtaken by emerging countries. Living standards are decreasing and the society is fragmenting.

New: Europe can over win the challenges that are lying ahead. It will remain ahead of emerging markets can cope up with America what will remain the economic power for the next 20 years. Although, Europe has chosen to develop itself in another way, pillars in this society are high living standards and public services available for everyone, and it has become an alternative and example for emerging markets to develop the “European way”.