Taken into account that the Internet relates to all people, all governments and businesses, and in fact to the entire world, the future of the Internet is evidently a very broad subject. Therefore, we have decided to look at the future of the Internet at a rather high level. We have identified that two forces are critical to the Real Net scenario, i.e. Internet Innovation and User Adaptation. These two forces have a positive effect on each other and thus reveal a reinforcing loop. Whenever innovation on the Internet takes place it will reinforce the adaptation of the users. In turn this will demand extra services and opportunities on the Internet and thus Internet innovation. Furthermore, we have seen that at the highest level the four areas of Politics, Economy, Society and Technology (PEST) are of importance to both Internet Innovation and User Adaptation. However, the two driving forces will also have a reciprocal effect on those four areas. 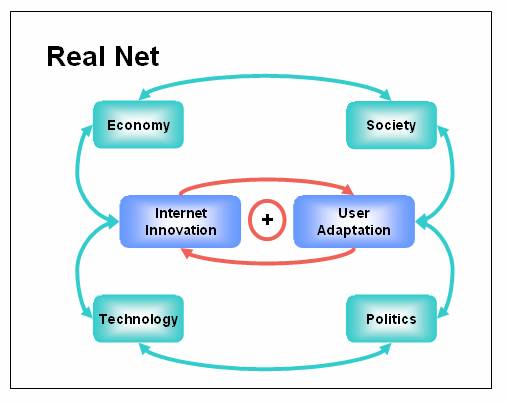 For example, take the evolution of e-commerce in recent years. The Internet Innovation of e-commerce was very dependent of the tax regulations, economic situation of companies, e-consciousness in business and technology, while the User Adaptation of e-commerce relied heavily on security regulations, economic situation of customers, e-consciousness in society and technology. Thus, as we consider these four areas highly influential on the evolution of the Internet, in the general Real Net Timeline for the years 2008, 2012 and 2015 we will comment on the most important developments regarding these areas.