As seen in Figure 1, a consequence tree represents a coherent system of driving forces, clusters of trends, and consequences. To discuss this matter further, the driving forces are the root system which assist by showing why a trend may develop in a specific way. In Figure 1, a trend-cluster constitutes the trunk of the tree. The height and number of branches (consequences) are drawn provide a glimpse of the development of the trend at a certain point. The first, second, and third-level consequences can be thought of as the branches of the tree. The perimeter of the branches of the tree shows the complexity of the development and its connections. 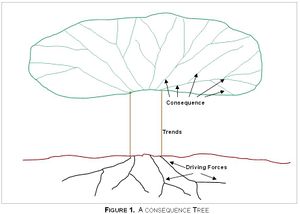 The Scenarios group members compiled the consequence tree by generating stories on what the Internet would be like in 2015. Each member of the group read out his or her story to the class. The result of the entire story-telling process was that several possibilites of what could happen on the Internet in 2015 originated from the trends (the trunk) of the consequence tree. These ideas were very useful for setting out upon unknown paths.

At the end of the story, the classmembers voted by showing how much the story "moved" them. Those students who were moved displayed this by getting up from their seats and swapping to another open seat. The number of members who were "moved" by the story were then counted and a tally was recorded to determine at the end of the readings which were the top scenarios out of the thirty stories that were read by each of the classmembers.

From these thirty stories, the top eight that receiving the most votes had the titles written on an easlepad. At this point, a reverse process was voted upon, which took the form of having members vote for the story that he or she would like to have removed. After this round of voting took place, the remaining four stories were the ones that scenarios woould be written about. The titles of these stories are as follows:

Pierre Wack wrote in 1985 that we could forecast the future only when its elements are predetermined that is, based on events that have already occurred, but whose consequences are yet to be unveiled to us. Other experts have reached the conclusion that forecasting is different from scenario building. While a group needs consensus to forecast future trends by making use of predetermined factors, the same group would need to explore the richness of uncertain elements to construct different scenarios about the future. The method is however not easy to employ given that people are, by nature, less tolerant to uncertainty.

Some techniques of scenario building start with selecting predetermined elements and uncertainties, analyzing each category and element, grouping them, and then constructing matrices and/or systems of variables (deductive approach). Our class turned out to have used a different approach of identifying uncertainties, called the inductive method. Since the project’s sponsor encouraged us to try storytelling and conversations, the deductive method was not appropriate.

After the scenario voting process ended, our team (“the project office”, as we called it) went back to researching: we analyzed again the driving forces, the scenario snapshots (“the stories”) of the class, and the voting process. We had to discover the patterns, the embedded key uncertainties that made our colleagues voting as they did. Finally, we identified two major variables: 1) the evolution of technologies for the chosen time span; and 2) the reaction of society (individuals and groups) to this evolution. Each of the final four scenarios is a story built around these two variables.

The scenario logic diagram below shows the key uncertainties as three nodes, each of them being a result of intertwining the two variables, each having both a social element and a technological one.

The first key uncertainty is called Does the Internet continue to transform society? Looking back at the Internet’s evolutionary path for the past ten years we could say that extraordinary things have happened and at a quite fast pace. If we go further with our analysis, we could reach two conclusions, based on McLuhan's theory (the maelstrom) and, to some extent, on the fractals theory. On the one hand, we might be right now on the edge of the maelstrom and the society might have come to the point when it’s time to rest aside and take time to adapt to the changes that have already occurred in technology. If this is the case, More of the Same is the scenario that might come to be true for the next ten years. Are people tired of so many divergent technologies and their continuous evolution? Is the huge technology access gap between North and South a major stumble block towards worldwide Internet adoption?

On the other hand, if society has still room to take more of the changes in technology, we go further and try to answer our second key uncertainty, Is this transformation integrated into the physical space? Individuals and groups (communities, business entities, governments, etc) might be now at the point where they value the convenience of using the Internet, wait for more technologies to be discovered, while incorporating those that have already occurred in the day-to-day life. In this case, Virtual Society is a possible outcome for our time span. Are there many causality relationships between numerous driving forces to predict this scenario? Is the implication of governments and NGOs a sign that we will favor a virtual society? Is the driver of the business world – cost reduction and efficiency – a crucial determinant of such society?

Going further with our third key uncertainty: Does the Internet remain as a unified standard? there are two possible answers. If Yes, the outcome would be our Real Net scenario, where real becomes more like the net. But what if the answer is No? Presently, the Internet community tries to work towards standardization of protocols and procedures. It also addresses the intellectual property rights and copyright issues associated with the standards process. Some internationally recognized organizations in the field are IANA, ISOC, IAB, IETF. But what happens if the Internet community suddenly stops sharing the same protocols and standards? What if nations, such as the US, become more restrictive about the Internet access, identity checking prior to access, in other words what if the Internet access (virtual access) becomes as restricted as the physical access from country to country? Then maybe our fourth scenario, Separate Directions, is going to be closer to the reality of the next ten-year period.

We conclude that the future of the Internet depends on both how the technology will change, and how the process of change and evolution itself will be managed and accepted by society. With the success of the Internet has come a proliferation of stakeholders with an economic as well as an intellectual investment in the network. Who will control the domain name space and the form of the next generation IP addresses? What will be the next social structure that will guide the Internet in the future? What is the role of policy makers and of national interests (security purposes) in setting standards? These are all uncertainties about the future of the Internet, and the answer not always lies in the technology domain. As the one of the Internet Society, ISOC, paper mentions, “If the Internet stumbles, it will not be because we lack for technology, vision, or motivation. It will be because we cannot set a direction and march collectively into the future.” Furthermore, let's keep in mind the laws of economics and the business models which are still going to be in place for the future were are talking about. The evolution of technology will still be driven by corporations' struggle to meet and stimulate market's demand and win in a highly competitive environment. If this would not be true, then how can we explain the millions and millions of dollars companies such as IBM and Microsoft invest in their R&D activities?

Back to Group 4: Scenario Logic